Having worked in the electronic gadgets field for years, I can tell you that technology has come a long way. Particularly, printing technology. The first time I saw 3D-printed masks, I was so impressed that I developed a deep interest in 3D-printers. My curiosity has led me to discover and write about some of the best devices out there. Today, I decided to write this Creality Ender 5 review to help you learn more about it. 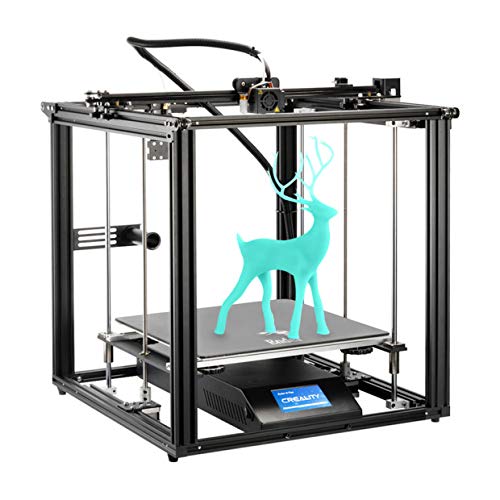 Creality Ender 5 Plus Get It From Amazon Learn More
We earn a commission if you click this link and make a purchase at no additional cost to you.

If you are fascinated by 3D printing like myself, then getting a high-quality 3D-printer has to be critical to you. Fortunately, 3D printing is no longer unusual. You can go out there and get yourself a quality printer such as this Creality Ender 5.

If you would like to embrace this technology and create 3D objects that will have an impact around you, you’re in luck. this is because Creality has made this possible with their Creality Ender 5. The printer comes as part of its line of impressive printers.

What impressed me most while putting this Creality Ender 5 review together is that the printer is exceptionally easy to use. In that case, this model could be your best bet if it is your first time using a 3D-printer.

From my extensive Creality Ender 5 review, it is safe to say that this printer comes with many features that make its functionality unparalleled. And if it delivers effective results, what else would you want?

However, I do not want to speak highly of the Creality Ender 5 just yet. First, we have to find out whether it’s reliable. Moreover, what features does it include to make it suitable for 3D printing? Does it have any downsides? Most importantly, what features make it stand out from other 3D printers?

Luckily for you, I did adequate research while working on this Creality Ender 5 review, which means that I can answer all these questions. So, without further ado, let’s get right into it.

Now, if you’ve had some experience with 3D printers, especially the Ender lineup, then assembling the Creality Ender 5 should be a walk in the park. However, even a beginner will have an easy time because the axes are pre-assembled.

Better yet, the Creality Ender 5 comes with an instruction manual. So, you can follow the steps, implying that you might be done in about an hour’s time. Besides, the manual is easy to understand and it comes with tools to help you with the setup process.·

While compiling this Creality Ender 5 review, I was also impressed that the printer has a modular design. But what exactly does this mean for you? Well, it means that you can add upgrades to the printer, turning it to the printer you desire. Creality Ender 5 gives you the freedom to add DIY upgrades, printable, as well as hardware upgrades. This, however, depends on your preferences. If you want a stock printer, you don’t have to add the upgrades.

After going through numerous Creality Ender 5 reviews, I was glad to know that Creality incorporated several features to give users of the printer value for their money. The printer delivers precision printing, has filament compatibility, and it has a huge build volume. And the best part? You get all these at a great price.

The 3D printer also comes with a magnetic bed, which I found very easy to pop in and remove. So, when using this printer to make your 3D objects, you will experience smooth handling. As if that’s not enough, Creality Ender 5 comes with a removable build plate.

Therefore, you can pop it in and out whenever you want. This feature makes it easy for you to remove your model when it gets done. Needless to say, this is a great feature, especially for a printer that has strong first layer adhesion.

I know you’re probably wondering why the dual shaft Y-axis is so important for the Creality Ender 5. Right? Well, the following is what I gathered while compiling this Creality Ender 5 review. This feature provides you with protection against issues such as shock imbalance. The printer may experience some shock imbalance when you use it over an extended period.

That aside, the Y-axis helps to add stability to your prints.

Now, imagine that you had to print 3D face masks for your family in your apartment. However, the 3D printer you’re using is making too much noise that it becomes a nuisance. That would be disappointing, right?

Fortunately, the Creality Ender 5 has you covered. From my extensive Creality Ender 5 review, the noiseless printing that this printer promises is legit. Creality has designed this 3D printer with v-shaped wheels to allow stable printing. Besides enhancing stability, this design makes sure that your printer produces less noise during the operation. 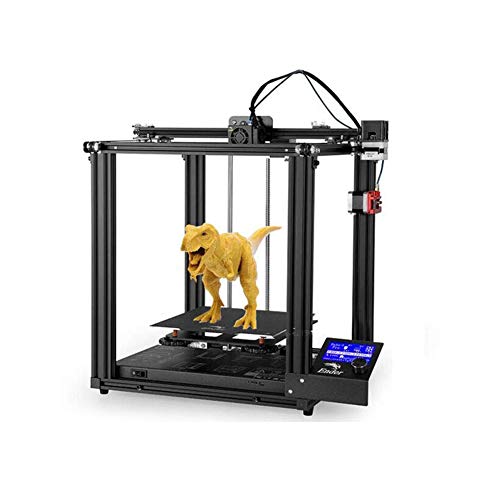 Unfortunately, Creality Ender 5 also has its flaws. However, they do not outweigh the good. With that said, let us look at some of this 3D printer’s downsides.

You see, when you purchase the Creality Ender 5, you will get an SD card. In it, you will find either Cura 15 or Cura 3.4.1 Software versions. From numerous Creality Ender 5 reviews, however, this presents a problem because these versions are only supported on Windows. So, if you have Mac or Linux Operating Systems, you will have to download the software yourself, which takes significant effort.

Another problem that I encountered while putting this Creality Ender 5 review together is that after downloading the software from the Ultimaker website, you will be required to enter the profile data by yourself.

Another flaw I found while working on this Creality Ender 5 review is that its print bed is not very stable. You see, the print bed on this printer is only connected to the Z-axis. But that’s not the major issue. This is, it’s only connected on one side.

So, when you’re making your prints, the print bed may wobble or shake. And that means that it might cause the bed to lose its level or worse even, leave unwanted parts in your models.

Some of the Creality Ender 5 reviews that I came across, however, revealed that there is some good news about this flaw. Turns out, you can get printable upgrades to help rectify the print bed problem.

From this Creality Ender 5 review, you already know that Creality Ender 5 comes with a removable magnetic build plate. What you might not know is that this plate is a bit flimsy. So, it might end up warping, and that may cause some problems with your plates. However, you can always make replacements to make it sturdier. 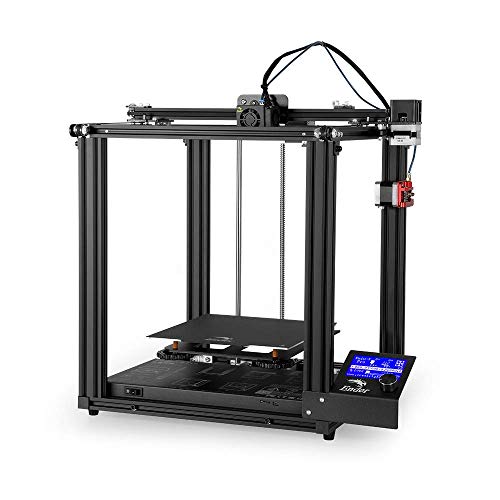 The printer also has many upgrades available. And that means that you can tune it to suit the 3D printing machine of your dreams. It also comes with the software. However, this is only advantageous to Windows users. Mac and Linux users have to download the software themselves. Once you are done setting up the software, however, you’ll have an easy time using it.

Additionally, Creality Ender 5 has a large build space. In fact, larger than its predecessors, and that is something you might like. From the Creality Ender 5 reviews that I found online, however, you might want to check on the print bed’s stability. If you feel that it’s flimsy, you could always get an upgrade.

Overall, this is an excellent 3D printer that is well-designed and can meet your expectations.

Creality Ender 5 Plus Get It From Amazon Learn More
We earn a commission if you click this link and make a purchase at no additional cost to you.

Are you looking to get started with 3D printing? Well, I would recommend you consider acquiring Creality Ender 5. It might be what you needed to print for years to come.

Now that you’re here, feel free to drop your views in our comment section. And don’t be shy to check out our other reviews. Happy printing!